Posted by NAFSO Convener's Diary Posted on 8:50 PM with No comments
Congratulations!
This is a great win today which brought the moral strength to the small scale fishermen who were fought against the Purse Seine nets. There are thousands of fishermen who fought against 53 license holders in Kandakuliya, Kalpitiya won the court case today at Magistrate court Puttlam.

23 Small Scale Fishers' were summoned to the Puttlam magistrate court today alleging the violence committed by them against Purse Seine net operators last 20th at Kuringgnampitiya. The 23 fishermen including Rev. Bandiwewe Diyasena thero the chief incumbent of Samudrasanna Viharasthanaya Kandakuliya, Kalpitiya were brought the attention the destruction caused by the purse seine nets at the courts today.
The Purse Seine operators, 53 in number got the legal support from the Department of Fisheries. The lawyer appeared on the court on behalf of the department of fisheries who had issued permits to the Purse Seine operations, argued why the permission need to continue under the existing law. 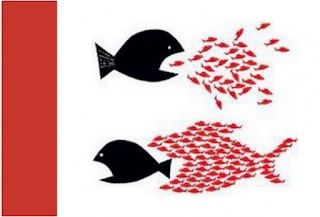 This is a great victory of small scale fishermen and we congratulate the fishermen, Rev. Diyasena Thero as well as three counsels appeared in the court today, Mr. Sampath Pushpakumara, Mr. Priyalal Sirisena and Ms. Raveendra Sumathipala.
Tweet